Graduate and undergraduate students won three prizes in what is considered the most prestigious competition in jazz education.

Hundreds of musicians, educators and industry professionals have received their first international recognition as DownBeat Award winners. Western’s Jazz Studies program now holds nearly 200 historic wins in virtually every category, making it one of the best college jazz programs in the world. 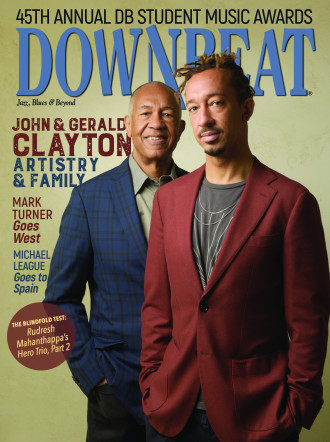 “Western Michigan University’s Jazz Program continues to gain recognition for the exceptional artistry of its students and faculty. With a newly redesigned degree that incorporates more technology, new partnerships and new faculty, Western’s jazz program is poised to foster the next generation of important new voices and continue its tradition of excellence,” said Rathbun, chair of the jazz department and associate professor of saxophone and jazz.

Western instructors have also established themselves on the international scene.

Keith Room, assistant professor of jazz drums and jazz studies, received 4.5 stars from critics for his new CD “Made In Kalamazoo” in the magazine’s August issue. Hall has been featured in many works, but this is his debut as the lead on an album.

“As a former WMU student and longtime instructor, Keith has played an important role in the University,” says Rathbun. “‘Made in Kalamazoo’ is an eye-opener on the breadth of his imagination and experience behind the drums and provides him with a long-awaited opportunity to show off his percussive prowess front and center.”

Rathbun himself was also recognized in the August issue and included in DownBeat’s 70th Annual International Critics’ Poll. The editorial team around the world selects musicians for established talents and rising stars. He was again recognized as a rising star in the tenor saxophone category, marking Rathbun’s second appearance on the list.

Check out DownBeat’s 45th Annual Student Music Awards in its June issue, and check out the 70th Annual Critics’ Poll and Hall’s Review in the August issue.